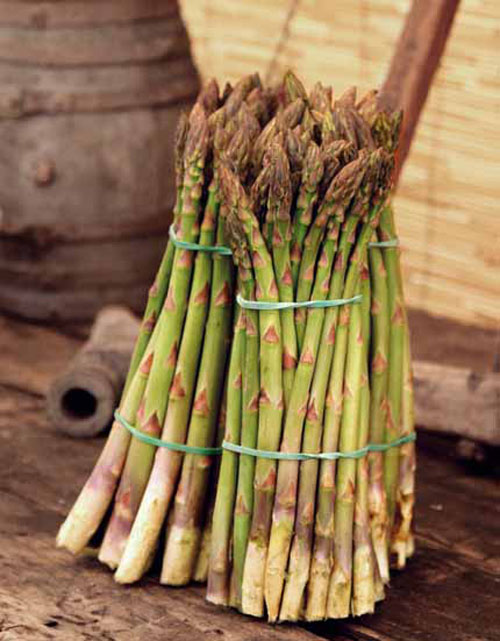 Sought after for its firmness and its delicate flavour, this asparagus was awarded PGI in 2003. It is the main star of countless dishes.

Link copied
The Green Asparagus of Altedo
The green asparagus grown in Altedo is fresh in taste, and unlike other fibrous varieties is soft with a delicate flavour. While soft, the Altedo asparagus has a firm tip with occasional curvature. It is usually 19 to 27cm in length, and the stalk is 1 or 2cm in diameter. It is a vivid green with a white stem of about 4cm. Altedo green asparagus was awarded IGP (protected geographical indication) by the EU in 2003. The IGP classification extends to the green asparagus varieties Eros, Mars and Ringo that are grown in the area that encompasses the municipalities in the province of Bologna north of the ancient Via Aemilia, including Altedo, and those in the province of Ferrara.

Nutritional and Culinary Properties of Altedo Asparagus
The green asparagus of Altedo contains fat, protein and carbs, but in small amounts. It also contains large amounts of calcium, phosphorous, magnesium, and potassium; as well as antioxidants, vitamins A, B6 and C, and folic acid which improves circulation. This asparagus also raises metabolism and a diuretic, helping to cleanse the kidneys. As a cooking ingredient, its natural excellence can be brought out and enjoyed through boiling and a light dressing of oil and salt. It also pairs beautifully with a butter sauce. Altedo asparagus is incredibly versatile and preparation methods one can use are many, but the most quintessential are risotto and pasta dishes, soups, frittata, and croquettes with onion and mozzarella. In 2003, following the asparagus’ IGP status, a Consortium for the protection and promotion of its production and sale was established which coordinates with the market to meet needs and demands.

Cultivation Methods
In the cultivation of Altedo Green Asparagus, healthy seedlings weighing 70g (locally referred to as “zampe” or “paws”) are set in the soil, with planting starting in late April. Planting seasons begins with the preparation of sandy soil with no moisture and with a healthy presence of organic matter. These are the optimal growing conditions. Then trenches are dug with one metre spaces in between which gives the seedlings enough space to grow. The seedlings are lined up 25 to 40cm apart in the trenches and then lightly covered. Over the next three to five weeks the seedlings are allowed to grow until the stems protrude from the earth, and left in this way until winter, where the stems are trimmed. By the time Spring comes around, the first asparagus roots will have grown.