HOME / DESSERTS / OTHER DESSERTS / Cannolo: the sweet taste of Sicily

Cannolo: The Sweet Taste of Sicily

Sicilian cannolo is probably the best representative of the regional patisserie

Link copied
Cannolo is perhaps the best representative of Sicilian traditional patisserie. It can be considered one of the earliest examples of street food and the perfect meeting of taste, tradition, history and culture. A remarkable trait is the sheer contrast between the crunch of the fried pastry and the softness of the filling. The pastry is made with flour and sugar and filled with creamy, fresh sheep’s ricotta cheese, an indispensable ingredient. Piana degli Albanesi, in the Metropolitan City of Palermo, is particularly renowned for its ricotta and cannoli, the latter having been produced since the Post-Second World War.

Variations
In Catania, the cannolo pastry is made with flour, sugar, margarine, salt, eggs and wine. In the past, cannoli used to be shaped around bamboo poles, which have been recently replaced by metal tubes. The shape is cemented with egg whites and then the pastry is deep-fried. As for the filling, ricotta is sieved so as to achieve a more even texture that makes it blend with the other ingredients better, namely candied pumpkin and dark chocolate. In the Catania area, cannoli are decorated with chopped pistachio of Bronte, whereas stripes of candied orange peels and dark chocolate drops are used around Palermo. The final touch is a light dusting of confectioner’s sugar. Variations include pistachio, orange, tangerine or chocolate-flavoured pastries, with a cinnamon-flavoured ricotta filling. The cannolo of Messina is recognisable by its wider muzzle. In Catania, the pastry tends to be more crumbly. In Piana degli Albanesi, cannoli are larger by as much as 20%.

History and name
Cannolo is one of the oldest staples of Sicilian cuisine. It may have originated from ancient Roman canneolus, a sweet pastry consumed on the occasion of Saturnalia, the festival in honour of deity Saturn. Legend has it cannolo was invented by the concubines of the Saracen emirs, who enjoyed cooking in their spare time. They might have tried to recreate a banana-shaped Arabian dessert, filled with ricotta, almonds and honey. Other sources indicate cannoli as a Carnival treats created by the nuns of a convent near Caltanissetta. 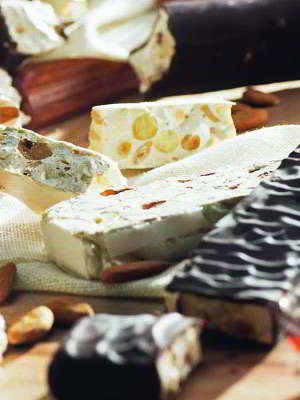