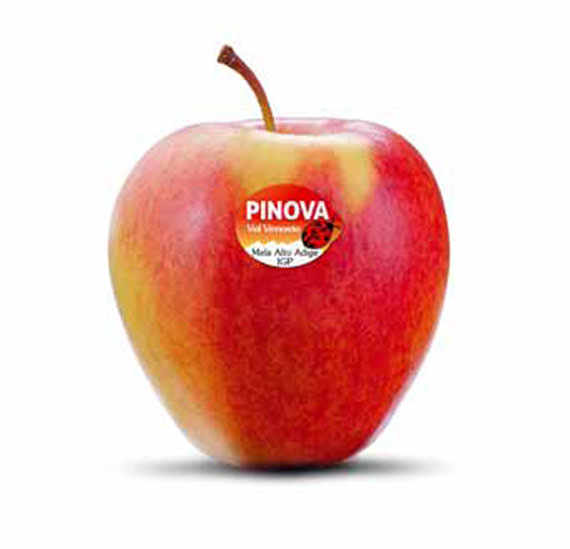 The Apple of Val Venosta’s eye

The “Pinova” apple, born in 1986, is known for its greenish-yellow skin painted a scarlet red. They are cultivated mainly in Alta Val Venosta. They have a smooth skin and are unique for their colour and prized for their perfect balance between sweet and sour.

Link copied
‘Pinova’ apples are a hybrid of the apple varieties ‘Golden Delicious’ and ‘Clivia’. Developed near Dresden, it has been cultivated since 1986. The fruit is mid-sized, with a greenish-yellow skin speckled with crimson-red. The flesh is juicy to the bite and characterised by its sharp and refreshing bitter-sweetness. In Val Venosta (Venosta Valley), they are harvested in September and arrive on the market in January. They keep extremely well and, as such, even if they are stored in a warehouse they lose neither flavour nor texture, and can be enjoyed even as late as the following July.

In 2005, ‘Pinova’ apples were granted PGI (Protected Geographical Indication) designation from the the EU, and Val Venosta ‘Pinova’ apples are among thirteen varieties in the region to be cultivated under the PGI mark of “South-Tyrol apples”. At present, ninety-three percent of Val Venosta apples are produced to an integrated production system, with the remaining seven percent being organically grown. The “Association of Val Venosta Producers of Fruit and Vegetables” (l’Associazione produttori ortofrutticoli Val Venosta Vip) was founded to improve quality control and also established one of its production goals as the reduction of harmful carbon emissions.

In 1987, the “Val Venosta Cooperatives Association” (cooperative di frutticoltori della Val Venosta) decided on regulations for quality control in order to distinguish its apples as truly unique from others grown in the Trentino-Alto Adide region, and also opened their first shop in Naturns, close to the city of Bolzano. The “Association of Val Venosta Producers of Fruit and Vegetables” in Val Venosta was officially opened in 1990, and unites the following seven apple production cooperatives below as a secondary partnership to the Cooperatives Association.

Val Venosta apples have established the goal of reducing carbon emissions in order to combat climate change. Of the seven cooperatives above, 7.8 million kWh are produced a year from clean, renewable solar energy, resulting in a reduction of CO2 emissions by around 4680 tons. The Association carefully inspects every aspect from production and packaging to sales and marketing. As such it has received an EDP (Environmental Production Declaration) certification, recognised internationally as showing a commitment to environmentally-friendly production methods. All of this leads to beautiful apples which taste as good as their eco-friendly roots.