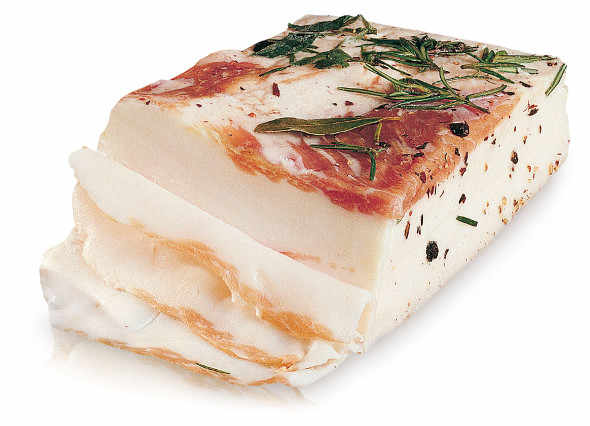 Lard d’Arnad PDO, the Pride of the Aosta Valley

Produced exclusively in the commune it was named after, for centuries Lard d’Arnad was regarded as peasant food. In recent years, Lard d’Arnad has become increasingly sought-after for its taste, made distinctive by hints of rosemary, sage and juniper. In 1996 it was awarded a protected designation of origin in 1996, becoming the one and only PDO lardo.

Link copied
Arnad is a small town, located on the bottom of the Aosta Valley, with a population of 1,400, where traditional farming practices are still well-routed, as is the case with Arnad’s Lardo or Lard d’Arnad ? being French the other official language in the region of the Aosta Valley. Originally regarded as peasant food, lardo has become increasingly sought-after in recent years, nationally and worldwide. Arnad’s Lardo is produced exclusively within the boundaries of the commune of Arnad and it has been the one and only lardo with a PDO since 1996.

Lardo d'Arnad is made with the fat from he shoulder and back of pigs, which must fulfil specific conditions and requirements. The pig must be an Italian heavy pig, at least nine months old and 160 kg. The chunks of meat - named baffe - are trimmed, refined, cut into square sections and finally arranged in layers in wooden containers, the so-called doils, in a brine of salt and herbs, such as rosemary, sage, laurel, juniper, cinnamon, pepper and other spices, not ground. The meat is left to rest for a period ranging from 3 to 12 or 15 months. The room temperature must be higher than 3°C but lower than 15°C. When lardo has reached maturity, it is left to drip dry and vacuum-packed or put in glass containers, with its brine. The lardo may be kept in these conditions up to one year.

Lard d’Arnad PDO is white-pinkish in colour, with a delicate flavour of spices, best enjoyed with rye bread and a few drops of honey. Lardo is a popular condiment for polenta and vegetable soups, and is still used to sear meat. Lard d’Arnad PDO is produced by three certified farms, in the limited amount of 300,000kg per year. However, lardo is produced on a private basis by many other families, albeit not certified. Lard d’Arnad can be paired with a light-bodied red wine, like Valle d’Aosta Arnad-Montjovet CDO, with a delicate floral bouquet and a fresh and agreeably tannic taste.