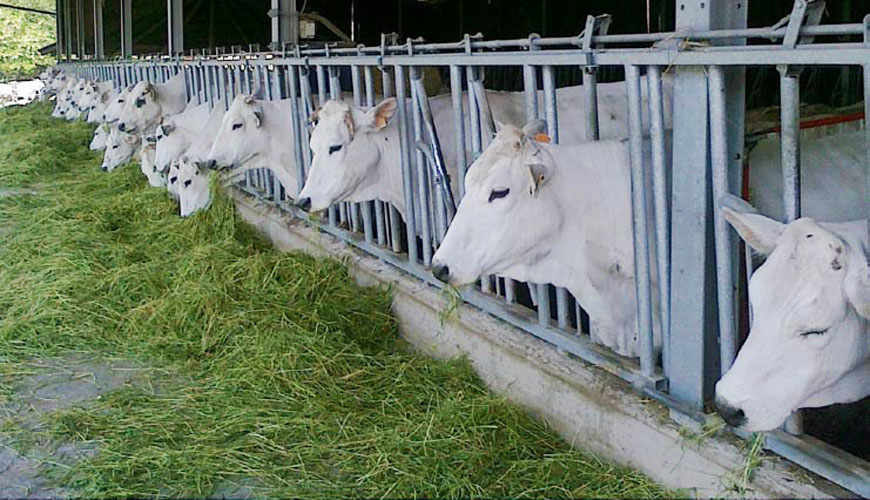 The Organic Chianina Beef reared in Canossa, Reggio Emilia Province, is high-quality in both rearing methods and food-safety.

Link copied
Plate to Pasture; Rearing Chianina Cattle.
In the province of Reggio Emilia, in the region of Banzola, lies the cattle farm of Umberto and Mauro Bigi, where Chianina cattle are raised. It is the only private cattle farm in Italy today to completely oversee the entire breeding cycle. From rearing, milling of fodder, meat processing, and distribution directly to consumers; the entire process is undertaken in the business internally. Moreover, with around 200 heads of cattle on the farm, it is one of the largest herds of Chianina cattle in Northern Italy. The cattle are reared the same as decades ago with the same traditional cattle management system, with some modern and functional adjustments.

The Natural Rearing Method
Rearing of the young takes place alongside the mother for the first six months. After they are no longer being weaned on the mother’s milk, the young cows are separated and grouped into bulls and heifers (male and female). Slaughtering occurs between 18 and 24 months of age, after being raised individually under controlled conditions that ensure optimal nutrition and growth. The breeding process involves around 100 heads of cow selected by the National Association of Italian Beef-Cattle Breeders (ANABIC) of Perugia. These are then allowed to breed naturally with three specially-selected bulls. The cows permitted to breed must be pure Chianina breeds, and must also have been registered as being of national pedigree. The harvested meat is registered with the Consortium of Italian Beef Producers (CCBI) and also granted the Organic label by the Institute of Environmental and Ethical Certification (ICEA). The organic label also involves raising the cattle on hay and grass organically cultivated across a one-hundred-acre area. Feed also includes corn flour, barley, broad beans and wheat bran. In accordance with organic rearing methods, they are raised with the utmost care: with livestock not being raised in unnatural straw-lined pens, but with fresh straw the cattle trample themselves, and they are regularly brushed. All of this serves to make the rearing process as clean and as comfortable for the cattle as possible.

Chianina Beef: A transparent supply-chain
When a cow reaches 18 months of age and a weight of roughly 900kg, it is slaughtered on-site with strict compliance to hygiene standards and HACCP system guidelines. The meat is hung and left to rest and mature for three or four weeks, sometimes even five. After which the bones are removed and the meat is carved and sorted into consumer-ready family packages weighing 22-24kg, roughly 1/16th of the carcass. The whole system is strictly managed, and consumers are entitled to visit freely at their discretion to ascertain the production methods on-site for themselves.