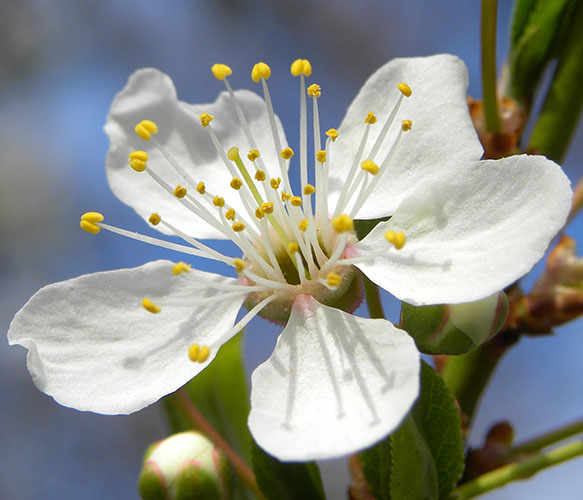 Regardless of its geography, the plum impressively high in nutrients.

Prunus domestica is the name of the plum species is most commonly grown in Europe, which comprises numerous subspecies. The species came to Europe from the Middle East and over time it has incorporated even more varieties such as the Japanese plum, characterised by larger and juicier drupes, with a smaller stone than the European plum. Its skin is shiny, yellow or light red. Its flesh is yellow, red or green, and, in contrast with its European counterpart is not very suitable for drying.

Plums originated from cross-breeding. The hybrids are characterised by large, juicy and sugary drupes. The Japanese plum arrived in Europe, generating new varieties. Crossing with the American plum, it gave birth to cultivars like Santa Rosa, Formosa, Beauty and Wickson. Regardless of its geography, the plum impressively high in nutrients, starting from vitamins A and C and minerals like calcium, phosphorus and potassium, which have a soothing effect. Due to their high fibre content, plums are  alleviate constipation, or infrequent bowel movement. The red-skinned plum is particularly rich in antioxidants. All plums are relatively low in calories, 46 per 100g.

Plums for all tastes

The drupes vary in size and colour of the skin, ranging from white-yellowish to dark blue, and of the flesh, ranging from green to golden yellow. They can be freestone or clingstone. The texture may be deliquescent or firm. The most prized European types are the greengage (Regina Claudia, in Italian), which is sweet and juicy, the damson, which is used for plum brandy in the Balkans, the Mirabelle, grown exclusively in France and distilled into into liqueur de Mirabelle. Finally, the Japanese plum has larger drupes with a yellow, red or green flesh, freestone or clingstone.