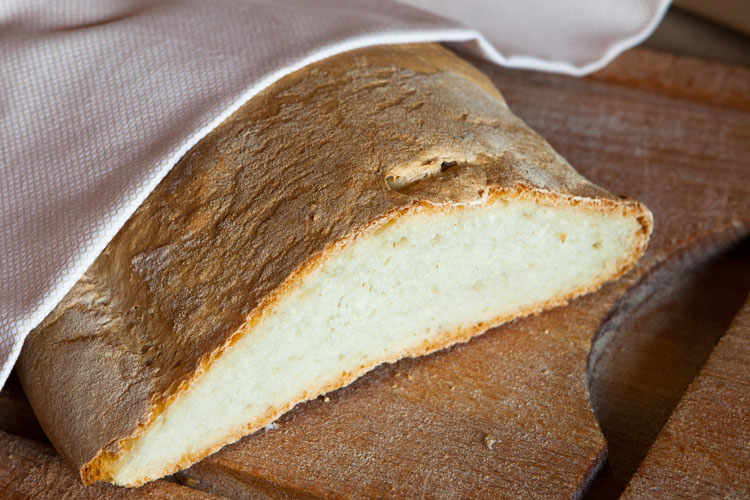 The Tuscan Bread. More Than Just A Loaf

Rectangular, round or ovoidal, crispy and fragrant, the Tuscan Bread was granted a PDO in 2014.

In 2014, the Ministry of Agricultural, Food and Forestry Policies duly acknowledged the viability of the Tuscan Bread (Pane Toscano) project by means of granting it a Protected Designation of Origin. The Tuscan Bread project came into force in 2002, on the initiative of the Bakers’ Organisation (within National Confederation of Small and Medium-Size Enterprises, CNA) and the General Confederation of Italian Crafts (Confindustria). 2004 saw the foundation of the Tuscan Bread (now PDO) Promotion Committee and the Consortium for the Protection and Promotion of the Tuscan Beead. That marked the beginning of a process of recovery of a close to obsolete supply chain, starting from several regional wheat cultivars used for flour production in the past.

Organoleptic properties and production of the Tuscan Bread

The Tuscan Bread comes in different shapes: rectangular, round or ovoidal. Its weight ranges from 500g to 1kg or 2kg, with a thickness of between 5 and 10cm. Its crust is hazelnut in colour, crisp and crumbly. Its crumbs have irregular-shaped holes, and a light hazelnut or golden colour. Its fragrance contains undertones of hazelnut, whereas its flavour is almost saltless. The Consortium provides that the Tuscan Bread must be made with ancient wheat varieties only, grown in Tuscany and milled in the traditional fashion. Leavening is triggered by a sourdough starter. The process takes longer than chemically leavened breads. However, sourdough allows to obtain a type of bread that is more nutritious and much easier to digest. Baking must occur while leavening is still in progress, in order for the heat to complete the deconstruction of the starches.

The guidelines start from the bread wheat types grown in the provinces of Livorno, Siena, Arezzo and Grosseto. Milling must only occur in a place dedicated to the processing of the wheat types listed in the guidelines. The flour must be kneaded exclusively with sourdough and water. The cakes of dough must then be left to ferment and rise naturally, before being baked. The Tuscan Bread is identified by a special logo and a label indicating every step of the production process. In addition to the Tuscan Bread PDO, other breads found in the region include the Albarese Bread, in the province of Grosseto, and the Verna Breadm in the province of Arezzo.

Pan di Sorc: A Sweet Discovery
Pan di Sorc is a typical bread from the province of Udine. It is an influence of the neighbouring Austria, where ...
The Traditional Tiella di Gaeta
“Tiella” are small pizzas packed with filling that fit in the palm of your hand. They are a traditional ...