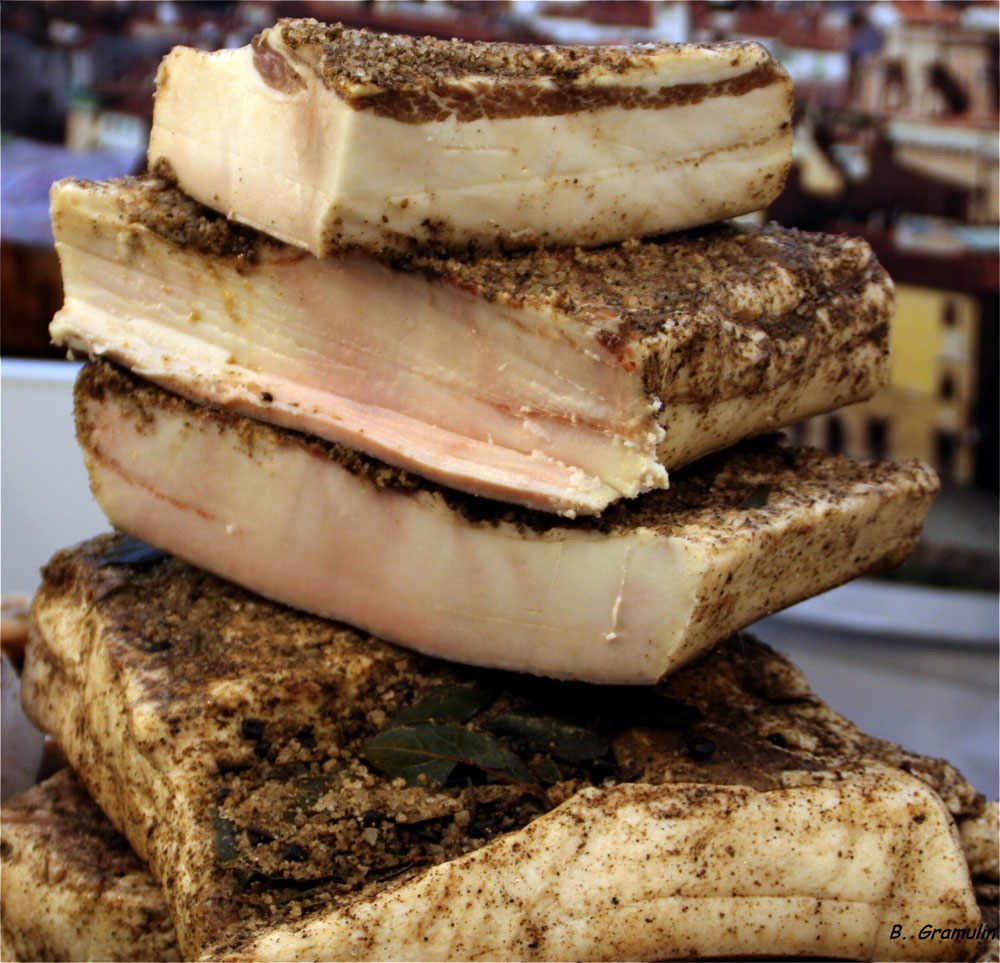 It is one of the most highly regarded specialities with a PGI (Protected Geographical Indication) in the area, prepared with pork fat in Colonnata, a hamlet of Carrara, worldwide-renowned for its white marble quarries. Marble is the very material of the basins where lardo is cured.

Link copied
The Lardo di Colonnata is as white as the marble cradle where it matures with a mixture of salt, garlic, herbs and spices, which enhance its delicate flavour. The quarries of Carrara used to eat lardo to stop hunger pangs. In Roman times, the slaves, who had been taken to Carrara from the north, learnt to support themselves with the less noble cuts of meat, that is strips of fatback, cured them in basins made of marble, which was the only material at their disposal. Long-regarded as peasant food, it has now been elevated as one of the most refined Italian products. The Lardo di Colonnata is produced in Colonnata, a hamlet of Carrara (in the province of Massa-Carrara), worldwide-renowned for the afore-mentioned white marble quarries. The Lardo di Colonnata was awarded a PGI (Protected Geographical Indication) in 2003.

Marble and flavours – The Lardo of Colonnata is made with the fatback of pigs from Emilia-Romagna, Lombardy, Veneto, Piedmont and Tuscany, weighing no less than 160kg. It is fundamental to cure the strips of fatback in the humid microclimate of the caves where the marble basins are located. The marble itself is paramount to achieve excellent. The EU originally forbid the use of marble basins and demanded that the meat be cured in aluminium vats instead, for reasons of hygiene. However, recent studies have shown that the microenvironment of the brine is repellent to most bacteria and that marble basins are in fact more sterile than aluminium. The tradition is therefore preserved.

Production and curing – Lardo is produced from September to May. Fatback is laid in the basins and covered in a brine of salt, herbs and spices, in compliance with the PGI guidelines. Salt helps in getting rid of the extra water in the fatback. The resulting brine provides an effective shield against bacteria. While being cured, most of the bad cholesterol becomes good. Curing must occur in a humid microclimate, at a temperature of 8-10 °C, over a period not inferior to 6 months. By the end of that period, lardo will have become white in colour, tinged with pink, and slightly transparent in the veins.

Tasting – You can recognise the Lardo di Colonnata PGI by the red seal wedged into the rind, with a bar code, a different serial number for each piece, the PGI logo and the maker’s address. It must be sliced with a well-sharpened knife. It can be enjoyed on small piece of toast. Parings include white and sparkling wines with a good acidity, such as Franciacorta docg or Trento doc, as well as red wines, like Lambrusco di Sorbara doc. The leftover rind is used in to make a local dish: pasta with beans.